Messi ranked best player in 2021 so far by CIES

Joan Laporta, spraying cava around the room on Sunday night after being elected Barcelona’s new president, was caught in the moment.

“To Paris, to mount a comeback!” he shouted, but it was more in hope than expectation.

That shred of belief was snuffed out on Wednesday night at the Parc des Princes, and now the hard graft begins for Barcelona’s commander-in-chief, of course, he will have taken great encouragement from the Blaugrana’s performance against Paris Saint-Germain.

The second leg may have finished 1-1, meaning PSG progressed 5-2 on aggregate, but Ronald Koeman’s side dominated their hosts from start to finish and could even have pulled off an incredible comeback had their finishing not been so poor, particularly during the first half.

The impressive display merely strengthened the belief that Barca could yet go on to win both La Liga and the Copa del Rey, which would be a big accomplishment in a transition season – potentially Lionel Messi’s last in Catalonia.

That’s the biggest job in the new president’s in-tray, of course: resolving the future of the club’s Argentine star. During his election campaign, Laporta said he had a good chance of convincing the No 10 to stay, based on their personal relationship.

Messi congratulated Laporta on his victory and right now seems more in than out, for the first time since he sent that summer burofax demanding to leave after the Bayern Munich humiliation.

Everything else Laporta is working on will be closely tied to Messi’s future.

Barcelona are in ill financial health and should the captain sign a new deal, it will have to be on greatly reduced terms. El Mundo leaked details of the Argentine’s contract, revealing he is earning up to €138 million (£112m/$167m) per year.

Barcelona have debts of approximately €1.2 billion (£1.1bn/$1.5bn), so it is evident that Messi must be willing to sacrifice a significant chunk of his salary if he is to remain at Camp Nou. 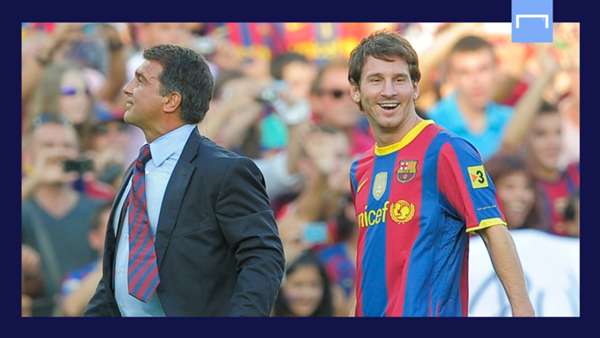 And should he stay, others will have to leave, including Antoine Griezmann and Philippe Coutinho. The pair cost a combined €280m (£240m/$333m) and although Barcelona can’t recoup that, they will look to make what they can while clearing out players who have never found their groove at Camp Nou.

On the other hand, should Messi walk away, there is a case for playing Griezmann in the No.10 role behind a more orthordox centre-forward, just as he does for France, with Olivier Giroud.

It is no secret that Griezmann is better suited to such a role, as underlined during his best days at Atletico Madrid alongside the likes of Mario Mandzukic, Fernando Torres, Diego Costa and Alvaro Morata.

Of course, whatever Messi decides, Laporta has to do better business than his predecessor Josep Maria Bartomeu it comes to sales.

Letting Luis Suarez join Atletico for next to nothing is the most recent and most painful example of inept outgoings, with the Uruguayan currently leading the Rojiblancos towards their first Liga title since 2014.

Another problem for the president is the issue of contracts.

Oscar Mingueza’s deal is up this summer, while Ousmane Dembele, Sergi Roberto, Ansu Fati, Pedri and Ilaix Moriba’s contracts all end in June 2022.

Laporta may be looking to save money, but each member of that quintet will be expecting a pay rise.

Ansu and Pedri, in particular, have become key figures for Barcelona and will demand numerical recognition of that fact on their wage slips.

Of course, using La Masia players to help improve the squad is not only an important part of Barcelona’s philosophy, but a way of reducing their debt. That might lead Laporta to permit Ronald Koeman to spend another year at the helm.

The Dutchman has leaned heavily on Pedri and Mingueza, while giving Ilaix game time ahead of summer signing Miralem Pjanic, underlining just how much faith he has in the academy. 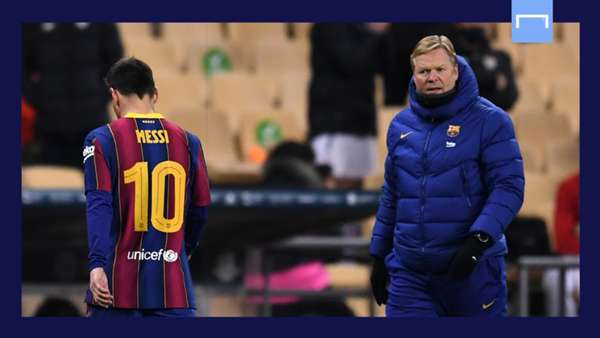 When one also considers Barcelona’s improving domestic form in 2021, there’s reason enough to continue with Koeman without even getting into the fact that the club could do without having to negotiate another multi-million euro pay-off with a sacked coach, after Ernesto Valverde and Quique Setien’s expensive exits in 2020.

A year of continuity certainly wouldn’t hurt either, while it would also provide Laporta with time to get Barca’s house in order before he decides exactly who he wants to lead the Blaugrana into a new era.

Of course, they will need to strengthen the squad if they are to re-establish themselves as a dominant force in Europe, so it’s worrying that Barca didn’t even have enough money to sign either Eric Garcia or Memphis Depay for knockdown prices in January.

Still, Manchester City defender Garcia is now almost certain to join for free this summer, and Lyon forward Depay could well do likewise.

And yet the feeling remains that Barcelona need a big signing to bolster morale and add goals, and Erling Haaland is still being linked despite their woeful financial state.

Laporta has a good relationship with the Norwegian’s agent, Mino Raiola, and hinted during his election campaign he could engineer a deal for the most coveted centre forward in world football.

Messi leads the scoring charts in Spain with 19 goals, but behind him for Barcelona is Griezmann on a pitiful six. It is clear that Barcelona need a world-class finisher to fill the gap left by Suarez.

Laporta is expected to add Mateu Alemany and Jordi Cruyff to the football planning department in the coming weeks and from there, next season’s project will start to crystallise.

It has been a long 11 years since he last led the club, back when Barcelona were at their peak under Pep Guardiola, and the Catalans face a much tougher and longer road back to the top this time around.

Still, after PSG jettisoned them out of Europe, ending any flights of fancy and redemption fantasies, Barcelona can now put their shoulder to the wheel.

Am a certified truth-teller/blogger with a distinguished opinion to life. Student at the University of Ghana. C.E.O of Ghanaontheglobe.com, For Promos/Ads/Booking for Events contact: 0548555750/ [email protected]
Previous Beautiful woman dies in Ho after boyfriend allegedly assaulted her
Next Juventus told to ‘free Ronaldo at the end of the season’ as former president says signing him was a mistake